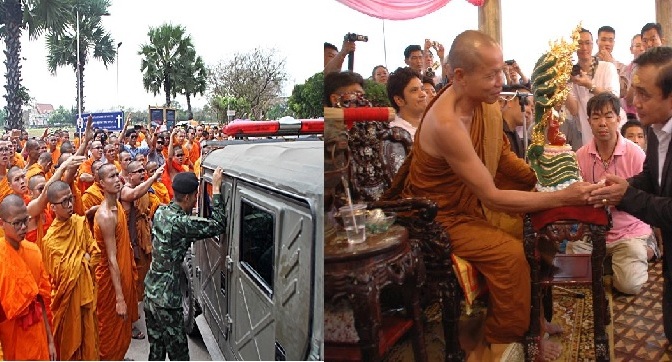 Recently Thai monks have been grumbling and fighting. The most recent incident involved hundreds of monks and their supporters resisting the military in order to gather at Puttamonton to protest against the actions of fascist monk Putta-Isara.

I cannot help feeling pleased at the sight of monks rocking a military vehicle and scuffling with soldiers who were sent by the junta to prohibit the gathering. But what is really behind this monk trouble?

According to Somparn Promta from Chulalongkorn University, even monks are not immune from the red-yellow conflict in Thai society.

On the yellow side is fascist monk Putta-Isara who helped to wreck the February 2014 elections alongside Sutep’s mob. Putta-Isara’s followers used fire arms to intimidate those wishing to vote. He is Generalissimo Prayut’s favourite monk and is allowed a free hand to demonstrate in the streets while others are prohibited. He is violently opposed to the abbot of Pak Nam temple becoming Supreme Patriarch, maybe coveting the position himself. He has also accused Dammakeye of wanting to “overthrow the monarchy”, a standard charge against one’s opponents in Thailand.

On the yellow side is also the Santi-Asoke faction close to Chamlong Simuang who was a leading light in the mis-named Peoples’ Alliance for Democracy. Both Putta-Isara and Chamlong supported the military overthrow of Taksin’s elected government.

But the red side are hardly angels. The abbot of Pak Nam has just been condemned by the Department of Special Investigation for forging documents over the importation of old classic cars. This was to avoid tax. He also praised Prayut’s military junta in July 2014, hoping to become Supreme Patriarch soon. What is also worrying is that the monks who protested at Puttamonton also called for Buddhism to be enshrined as the national religion in the new constitution, thus disenfranchising and excluding other faiths, especially Islam. Not only is this thoroughly reactionary, but it would increase the repression of Malay Muslims in Patani.

At the same time a number of reactionary Buddhist groups in the north, led by the Buddhism Protection Society of Chiang Mai, have come out against building a Halal production centre. This stinks of the kind of Islamophobia expressed by Burmese fascist monks. The north of Thailand has a distinct Muslim population of Chinese descent who were part of ancient trading routes.

As for Dammakeye, it is a sect steeped in scandal and accusations of accumulating untold riches. Urban middle class followers believe that the more you donate, the more merit you acquire. They also believe that people are poor because they sinned in their past life. Rich and powerful people have supported this sect for decades.

There used to be a mistaken belief that Thai Buddhist monks were not involved in politics and shouldn’t be involved in politics. The reality has always been different and this myth was merely an attempt by military rulers in the 1950s to control monks under a centralised authority.

There is no point in arguing about which faction represents “true Buddhism” because, as Karl Marx once wrote, religion is how people practice it and not what is written in holy texts. The monks can fight it out among themselves for all I care, so long as they don’t threaten freedom and democracy. As an atheist I believe that religion or any philosophy should be personal matter, nothing to do with the state.